The first thing on Papert and Solomon’s (1971) list of twenty things is make a turtle. Over the intervening fifty years the programmable turtle has featured as many young people’s first introduction to programming, both on the floor and on the screen. It still has much to commend it: it is simple enough for children to grasp the basic idea of the robot’s operation - it moves forwards or backwards; it turns to the left or to the right; it can draw, or not draw, as it moves. The hardware itself is simple enough too: motors for each of the main wheels, able to turn independently, and a pen that can be raised or lowered that fits right in the middle of these wheels: as a ‘notional machine’ (Boulay et al., 1981), it seems much easier for a child to grasp conceptually than a smartphone, a tablet or a distant website. It is also a friendly sort of thing: it is neither too big, nor too small; it often develops some sort of character, at least in the child’s eyes; and, crucially, the child can put herself in the turtle’s place. The humble turtle is capable of great things, and many realise they can move on from drawing regular polygons or simple pictures to stunning, complex geometric figures.

Turtles all the way down

Often a child’s first experience of programming, even if it’s not called that at the time, is with some sort of floor robot, such as Bee-Bot®. Whilst not a true Logo turtle, this can be given a sequence of move and turn instructions, and even very young children quickly figure out for themselves what it can, and cannot, do. More sophisticated floor turtles can be found, such as Pro-Bot® and InO-Bot, both of which are ‘proper’ turtles in the sense of being able to draw: the former can be programmed using buttons on the device in a crude version of Logo, the latter on screen using a building-block language inspired by Scratch. These devices seem rather less popular than Bee-Bot® itself, perhaps because of additional expense or because teachers think that when a pupil is ready to move on from the Bee-Bot®, they’re ready to move on to Scratch.

Scratch takes Logo turtles as a starting point, sprites in Scratch can move and turn just as turtles do; they can also say things, play sounds, change their appearance, interact with other sprites, respond to external events and do lots of things that floor turtles can’t. However, in the current version of Scratch they can only draw using an additional library of ‘pen’ commands, and they are confined to the world of the screen.

Sooner, or hopefully later, the young programmer moves on from block-based programming in Scratch or a similar environment, to text-based programming, perhaps using a Logo interpreter here to help bridge this gap, or perhaps jumping straight in to Python programming. Even here though a good teacher might scaffold the transition to the additional cognitive load of text-based programming through working in the familiar territory of turtle graphics importing the necessary methods from Python’s Turtle module. This is a sophisticated toolkit, and there are some lovely examples available, such as a playable, but unbeatable, version of Nim, arguably the first ever computer game (Flesch, 1951).

However, in all these instances, from toy robots through to programming in Python, the child never builds a turtle: they just use one, either on the floor or on screen, built by the experts. Back in 1971, I think Papert and Solomon had in mind something a little more visceral. How might we replicate this today?

As well as the on-screen programming, many have argued for some sort of physical computing to go with this: providing some introduction to input and output beyond mouse, keyboard, and screen, touch or otherwise. LEGO® Mindstorms® named after Papert’s (1980) book, (Bumgardner, 2007), offers one possibility here. Whilst the step-by-step build instructions for a floor turtle are not included in the standard materials, a ‘master builder’ would be able to figure these out for herself. For others, Astolfo et al. (2007), provide an outline of what’s needed.

Another approach might be to make use of a micro:bit as the brains for a floor turtle, using the edge connector to link this to a powered control board for motors. There are kits to make something like this using a micro:bit readily available. On the other hand, with a few bits of hardware and some ingenuity, this approach comes close to Papert and Solomon’s idea of building ones own turtle.

Another approach to making a turtle would be to reinterpret this as making a virtual rather than physical turtle - adding at least some of the turtle graphics commands to a language which doesn’t have these already, such as Processing.

Processing began back in 2001, thirty years on from Papert and Solomon’s paper, and took some inspiration from Logo, as a visually expressive language, and one suitable as a first programming language. Processing offers a way of using code to create beautiful visual and interactive media, as well as modelling applications. Originally developed in Java, it can usefully be seen as an introduction to programming in that language, doing lots of the heavy lifting needed to get something interesting up on screen whilst still scaffolding the syntax and approaches. There’s also a Python syntax version, but much of the most recent development work has happened in the native Javascript version, p5.js. For those working in schools this has the huge advantage of not needing anything installed locally: there’s an editor right there in the browser, as well as the storage and persistent URLs needed for folks to share their programs (‘sketches’ in the processing jargon) with a global audience. One reason that Processing, particularly in its p5.js incarnation works well as an introductory text-based language is that it provides some immediate motivation for moving on from Scratch: it’s hard to persuade pupils who’ve created games, animations and music in Scratch of the value to be found in searching through or sorting arbitrary lists in Python, but much easier to convince them that it’s worth learning the syntax to create an amazing generative animation in p5.js.

Whilst Processing is designed with graphics in mind, out of the box it has no implementation of Logo’s turtle, but rather adopts an entirely Cartesian model of the canvas: if you want to program a turtle in Processing, you have to make one.

To me, the most natural way to make a turtle in Processing is as an object: the turtle has properties (its position on the screen, its heading, whether the pen is up or down, perhaps the colour and thickness of the line drawn), and methods (moving forward, backward, turning left or right, picking the pen up, putting the pen down, heading home, perhaps even reporting where it is and where it’s headed).

The turtle then becomes not merely an object to think with for geometry, but an introduction to object oriented programming, and a reference object for thinking about some of these, often quite subtle, ideas.

Here’s one attempt at defining a class of turtles, and constructing a new object in the class, right at the centre of the canvas:

We might then go ahead and start adding some methods, starting with moving forward. As we’re having to convert from the turtle-centric polar frame to the canvas’s Cartesian frame, the math here is high school, but then so is object oriented, text-based programming.

Turning right and left though are just changes in the turtle’s direction:

Similarly, pen up and pen down instructions simply change the value of the turtle’s penDown parameter:

Once all the necessary methods have been created, it’s time to put this to the test. The code here, ran once as part of p5.js’s setup procedure draws a regular pentagon, as expected. You can see the code borrowed from Logo and that from native Javascript:

More interesting examples might be experiments with Papert’s notion of the ‘squiral’ (Papert, 1980):

Which produces the following: 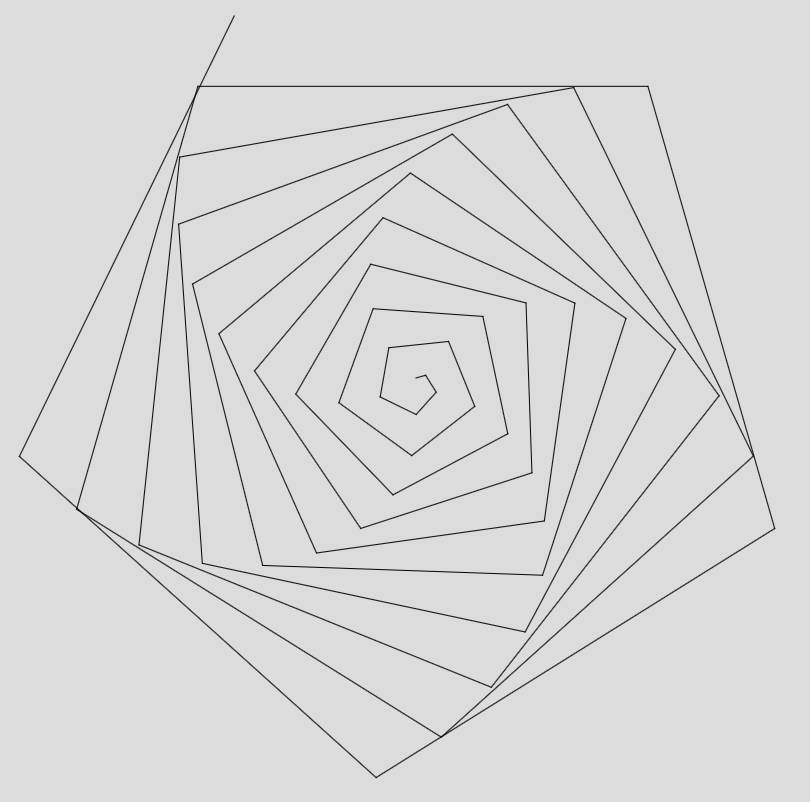 Or, we can go further still, and implement recursion to create a fractal, such as the Koch Flake (Koch, 1904). 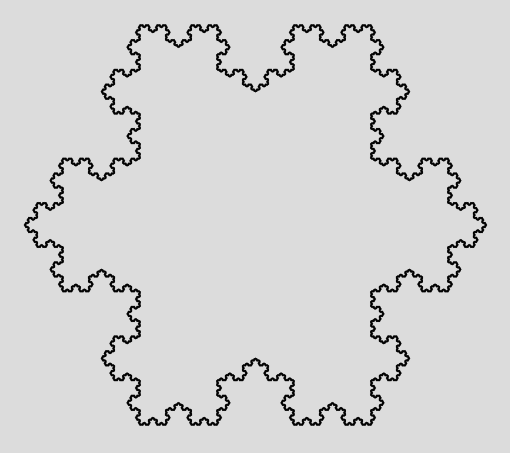 There is, of course, plenty more that can be done in turtle graphics, and Processing itself. I have shared my turtle class and an example sketch online for the reader to extend further.

What we have though is using Papert and Solomon’s old idea of making a turtle as a way in to understand some far deeper ideas than just learning about exterior angles of polygons or making pretty patterns on screen. Making a turtle crosses an abstraction boundary into hardware, or at the very least, objects, properties and methods, all the while staying within reach of the familiar home ground of the turtle itself.