Somewhere close to the start of the English maths curriculum, pupils learn to work with coins, initially as physical manipulatives, then as icons and eventually as numbers. By the age of seven or eight, pupils are taught to “find different combinations of coins that equal the same amounts of money”. This sounds quite straightforward.

It’s a problem that lends itself to a greedy algorithm:

As pupils become more fluent with programming in general and Scratch in particular, they might make use of more procedures for dealing with each coin value in turn or perhaps lists for the coin values and the coins needed. 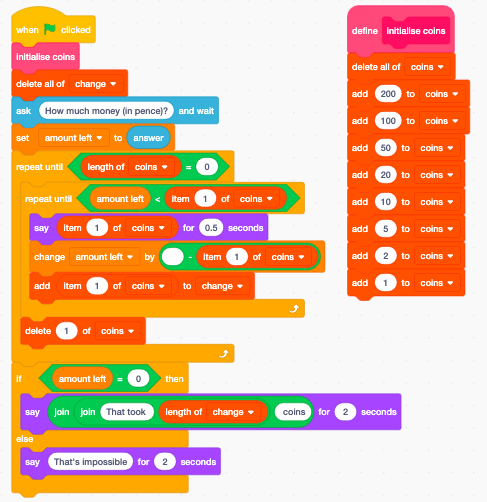 Whilst the maths here is on Year 2 of the primary curriculum, I don’t think we’d expect Year 2 to be able to write Scratch code to work out the solution, but by the end of primary, I’d hope that most pupils would be able to create a version of this in Scratch themselves. At some point in Key Stage 3, I’d hope that pupils could make the transfer over to coding the same algorithm in Python, perhaps along these lines:

This works well enough for English coins. We can generalise this though: it’s easy enough to modify it to work with US coinage too, with English pre-decimal (or post-Brexit?) currency, and with the equally Byzantine Galleons, Sickles and Knuts if you find yourself teaching programming at Hogwarts.

Given the ease with which pupils can find the smallest number of coins for amounts, I think a set of, let’s call them, bit-coins, perhaps first as manipulatives, then as pictures, finally as numbers, could be the easiest way to get pupils converting numbers to binary.

The above Python code works well enough for working out the bit values, and could be used for other number bases too – use 64, 8 and 1 to get octal. Use 16 and 1 to get hexadecimal. I think a coin-based model such as this goes a long way to internalise an understanding of the maths here.

If we’d like to actually get the binary out, then a little remixing is needed.

All this looks great, doesn’t it? We’ve got a general algorithm here to solve all sorts of coin decomposition problems, and have generalised it to convert numbers from to binary and even to other number bases.

The problem is, this algorithm doesn’t always work.

What about coins worth 1p, 10p, 20p and 25p coins. How would you make 40p? If you follow the greedy algorithm, you’d use a 25p, 10p and five 1p coins, so that’s seven coins in all. If you stop and think a bit, you might decide that just two, 20p coins would be better! How come the greedy algorithm brakes down here?

Or, imagine that we only have 7p and 9p coins. What combination would you use to make 47p? My Python code happily returns five 9p coins, but that’s wrong! You can’t make 47p using just 7p and 9p ‘coins’. Why not? You can, however, make any amount bigger than 47p, although my greedy algorithm gets most of these wrong too.

Generalising this for any set of coin values gives us this recursive Python code:

This, though, is incredibly slow – my 38p with English coins example takes over 37 million calls to the recursive function, and takes nearly 30 seconds to run on my poor Mac Book. I suspect most Year 2 children would be quicker!

So, we’ve a simple maths problem that we cover in Year 2 maths lessons, but taking this into computing, we can automate solving this, we can generalise this to a far broader class of problems, we can link this to binary (and other number base) conversion, we can get to grips with some tricky logical bugs, and apply sophisticated techniques like recursion and memorisation. From this example alone, I reckon it’s well worth making these connections between the maths curriculum and computing!